Around the World: Ireland – Seafood Chowder 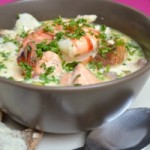 This is Irish for hello 🙂 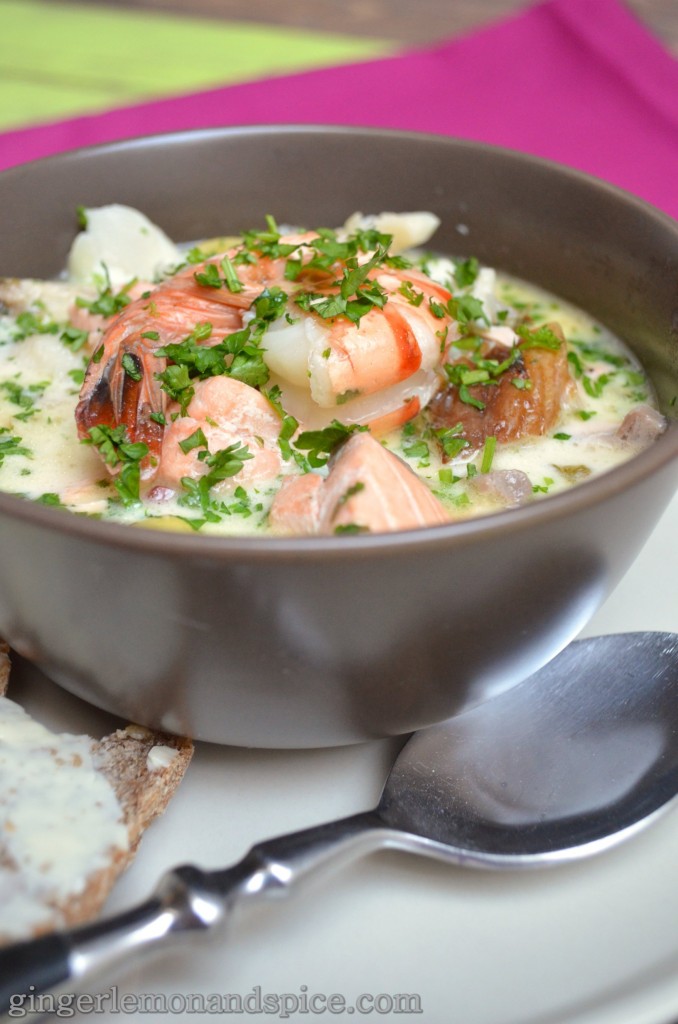 In Ireland they have their own language, Gaelic or Irish. It is a very funny sounding language and difficult to pronounce if you just see the written form! Every child in Ireland has to learn Irish at school and it is still very important there! By law every sign and plaque has to be translated and names of companies such as the ‘Bus Éireann’ (national autobus company) or An Garda Siochana (which is the police) are in Irish, too. It even is very important in the law business and if there is doubt the Irish version of the law is always the legal one. The government does a lot to preserve the language and even sponsors TV programs that send only in Irish. 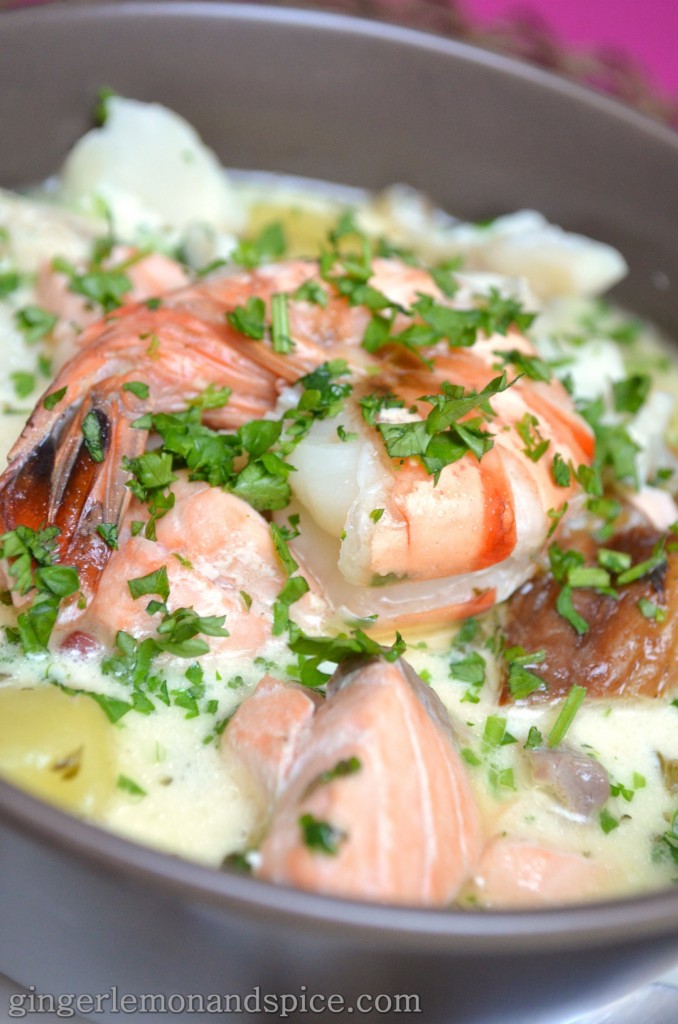 As you all know already Ireland is an island, which means fishing and eating seafood is quite popular in this country. I remember once buying and transporting a whole half side of a salmon back home to Germany, because my dad wanted to have it! Unfortunatly I had to buy it in the last city I was in (which was Killarney, I did a little backpacking tour on this trip) and the supermarket I wanted to go to because I thought it was big enough was like 2 or 3 miles outside of the city. So what did I do? Of course I walked there because I made a promise, and back walking I went with the half side of a salmon so big, that it didn’t fit into my bag. I still think the passing drivers were laughing at me 😉

In Germany eating salmon is something special. If you are at a buffett and they serve smoked salmon it’s always the first thing that’s gone! People love it, but it definitly is not an everyday food here. But when I told anybody Irish about my plan to buy some salmon to take home (I had to ask for directions!) they were all quite amused 😉 Sure they eat salmon as well, but it does not have the same status as in Germany! Quite a funny thing to notice 🙂 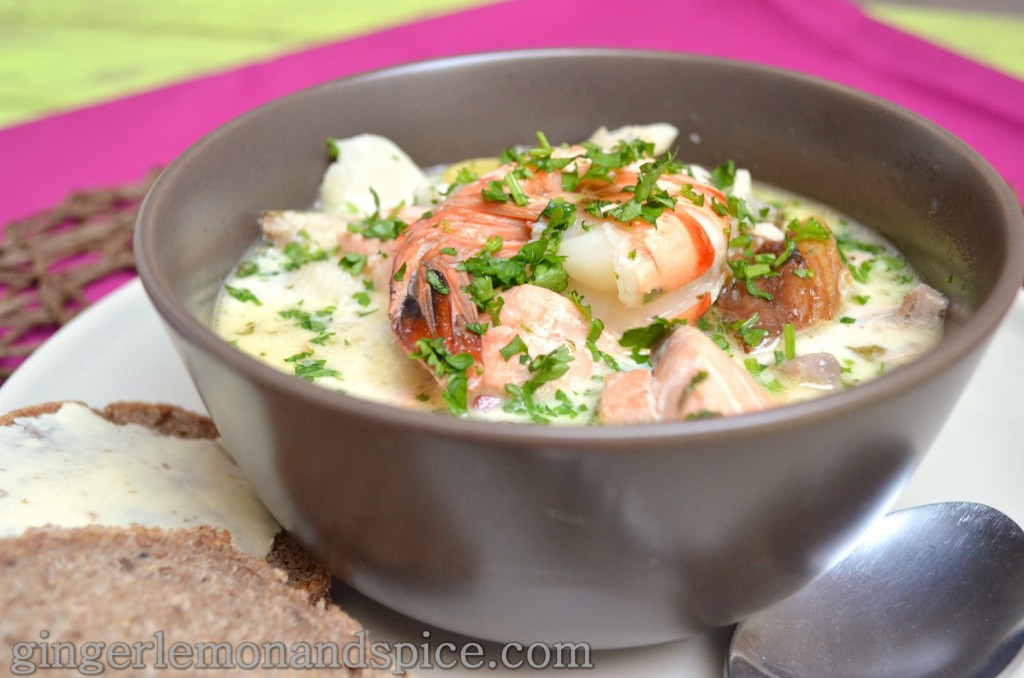 For today I have a Seafood dish for you, that I range in the category of soup – a very chunky one, but still 😉 Since I couldn’t really find traditional Irish salads I thought soup was a good alternitive!

This Seafood chowder has fresh salmon and haddock and smoked mackerel (which I would maybe substitute for a less fatty smoked fish when I do this again) and I even had big prawns in there. But you can use any fresh (white) fish  or add mussels if you like them (I would have, but they were only sold in 2kg packs – waaay too much for me).

It is a very delicious dish! I wasn’t sure if the flavors would work together, especially what the smoked fish does in this chowder, but it really was perfect! Traditionally it is served with a big slice of brown soda bread, but I had it with a selfmade rough sourdough bread. Scrumptious!!! 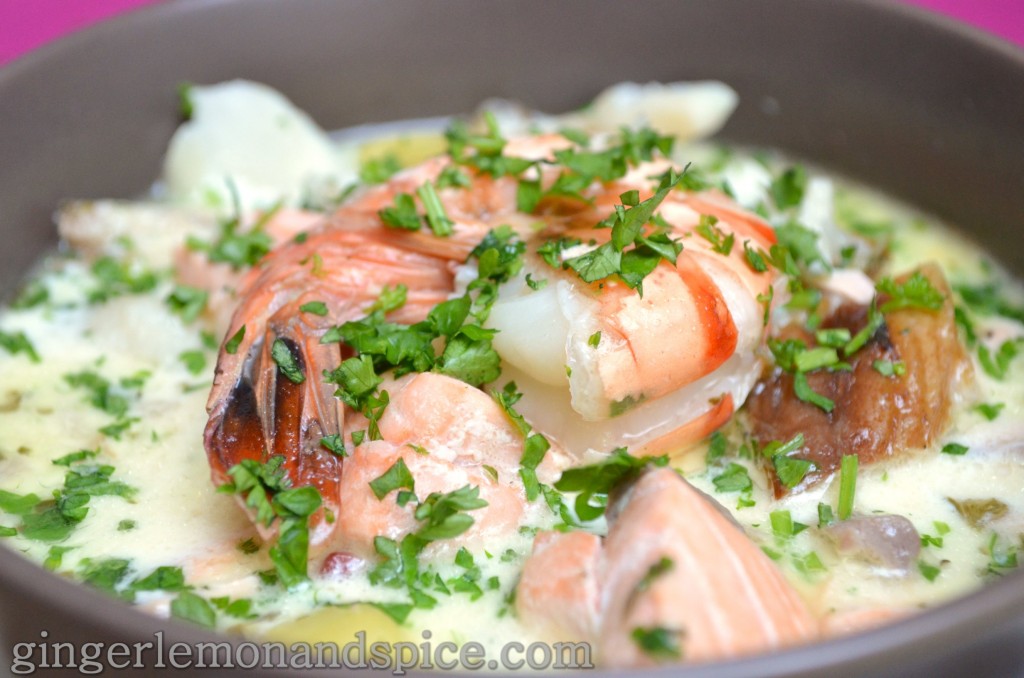